For the third consecutive week and the second time in a points’ paying race, NASCAR visits one of the similarly-configured, 1.5-mile tracks. 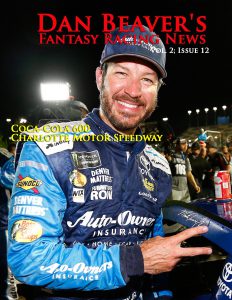 Kansas Speedway and the GoBowling.com 400 turned out to be a pivotal event, but not in the way most expected. Accidents in the pits and on the track ended “cookie-cutter” streaks for two of NASCAR’s hottest drivers and sent two other racers to the infield care center.

Joey Logano exploded a brake rotor on lap 199 of the GoBowling.com 400, veered left into Danica Patrick and the pair collected Aric Almirola. Logano and Patrick climbed from their cars; Almirola dropped his window net to signal he was okay, but on further review, had to be cut from the cockpit.

In a season that has seen her enthusiasm wane progressively, Patrick was as dejected as ever before. Logano was visibly shaken by the impact taken by Almirola, and the driver of the No. 43 will be out of the cockpit indefinitely as a lower vertebra heels. Regan Smith has been named as his replacement for now.

Chase Elliott made heavy contact with Michael McDowell in the pits early in the race when either his crew chief or spotter cleared him too soon. This Young Gun has been mostly unflappable during the season-to-date, but even though McDowell was not at fault, Elliott rammed the back of his stocker after leaving the pits.

Folks: Summer isn’t even here yet and tempers are boiling.