Four times a year, fantasy players can take all their analysis and throw it out the window. Both Talladega SuperSpeedway and both Daytona International Speedway’s races defy any attempt to build an accurate predictive model. 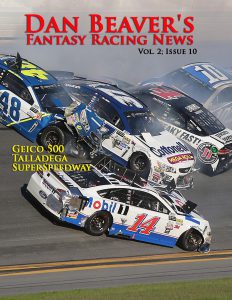 That uncertainty can be exciting for fans without any skin in the game. Fantasy players have a different set of concerns, however, and that make this race much less enjoyable.

There a few statistics that suggest who is going to run well, but nothing screams that any given driver is a must-have. In 2015, Dale Earnhardt Jr. swept the top-three in all four restrictor-plate, superspeedway races. The next year, he could not crack the top 20.

And, of course, there are those nagging exceptions that try to draw players into a sense of believing that something is truly predictive. Kurt Busch has finished 12th or better in nine of his last 10 plate races and he was going to get another top-10 at Daytona last July before he was spun out of fourth on the final corner of the final lap.

Of course, the fact that he was on this writer’s Draft Kings lineup that week probably had something to do with his misfortune as well.