Twice a year, NASCAR forces the drivers to turn both left and right. 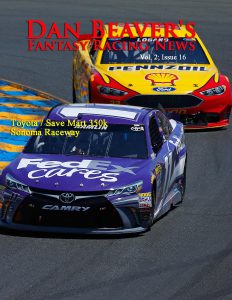 There was a time when they simply endured this humiliation and tried to salvage as many points as possible. Now, the best drivers in the NASCAR field on ovals can also regularly be counted on as top contenders on road courses. That not only changed every racer’s strategy, it also impacted fantasy players.

When half the field struggled simply to keep all four wheels on the pavement, road ringers were good choices to finish in the top 20 and grab the occasional top-10. That allowed us to save an allocation for drivers like Joey Logano, Kevin Harvick, or Kyle Busch. Now, each of those drivers regularly score top-fives.

There are still some surprise faces that grace the front of the field to a greater percentage than on ovals, such as AJ Allmendinger and Clint Bowyer, but true road ringers are hard to find.

This week, three teams will employ road specialists and none of them are particularly strong organizations. That means that no matter how good the driver is, he is unlikely to be able to overcome his equipment. One exception might be Alon Day, who becomes the first NASCAR Euro driver to compete in the Cup series. His salary cap is going to be low in most games—when he is available at all—at that will stretch the budget at the top.