The traditional name of this weekend’s race is the Firecracker 400. We would like to suggest a change. 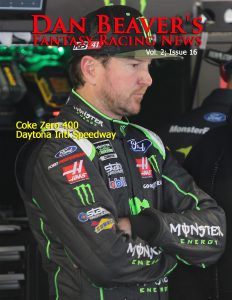 From this point forward, the race should become known as the “Maybe 400”, with Talladega SuperSpeedway’s two events labeled the “Lottery 501” and the “Perhaps 500”. We’re not crazy; that first race of the season should always remain the Daytona 500.

The outcome of a restrictor-plate, superspeedway race is impossible to predict, but that does not mean they cannot be handicapped.

This year’s Daytona 500 and Geico 500—sorry, the Perhaps 500—are not only the two most recent plate races, they provide great examples of the unpredictability of this type of event.

At Daytona while teams were still trying to figure out the best way to play the segment strategy, a group of Toyotas pitted early and got back on track to settle in just ahead of the leaders on the tail-end of the lead lap. Kyle Busch was determined to stay in front of first-place Dale Earnhardt Jr. and spun with the effort, collecting the leader and many cars in the top 10.

At Talladega, Chase Elliott was running second and had his sight set on the lead when he was turned into the wall by AJ Allmendinger. By the time the smoke cleared, nearly half the pack—17 cars—sustained some damage including one of our favorite sleeper Michael McDowell who was running 15th at the time.

Still, there are drivers who run strong on this course and dark horses that seem to make their way to the front of the pack almost every week. And the fact that there are no guarantees in this sport, does not mean that a player cannot hedge their bets with informed decisions.