Last week’s top-10 was one of the most unexpected we’ve seen in several years. 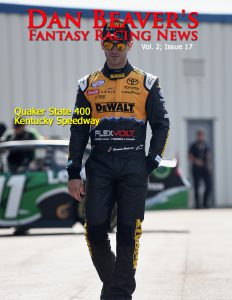 Fantasy players have come to expect a few dark horses sprinkled into the top-10, but the Coke Zero 400 results featured only two previous winners from earlier in the season. Moreover, Ricky Stenhouse Jr. was a former winner because he won the Talladega SuperSpeedway lottery; Ryan Newman won with fuel mileage strategy.

Jimmie Johnson finished 12th and he was the only other driver with a 2017 win to finish on the lead lap.

That left plenty of room for dark horse contenders to run with the leaders, but even so there were few who expected Michael McDowell to score a top-five, or David Ragan, Brendan Gaughan, and Chris Buescher to finish in the top 10. If one guessed correctly, it would have been extremely easy to select the top six drivers in salary cap games with thousands of dollars left over.

Since racing is a zero sum game, they got to the front by passing drivers who have been strong all season. Of course, it is pretty easy to pass a car that is a crumpled wreck—but even so, eight of the top 10 drivers based on our Fantasy Power Rankings finished 20th or worse.