The last three races of the season have been important because the similarly-configured, 1.5-mile tracks and short, flat tracks dominate the schedule. Auto Club is longer in length than Atlanta Motor Speedway and Las Vegas Motor Speedway, but it fits into the larger category of similarly-configured, 1.5- and two-mile tracks. These courses require many of the same characteristics in terms of setups, horsepower, aerodynamics, and mechanical grip. 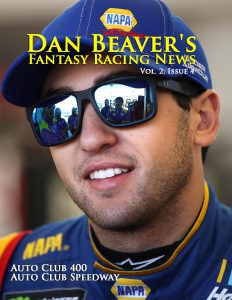 One way to parse the data is to look at the most recent results. The Folds of Honor QuikTrip 500 and Kobalt 400 were held on more steeply-banked tracks and measure a half-mile less in length, but their close proximity to the Auto Club 400 is useful because it shows recent momentum. It is notable that many of the drivers had similar results on those two courses.

Another helpful exercise is to look at tracks that are more closely comparable.

Michigan and Auto Club are among the closest comparatives on the schedule of any two tracks and drivers who run well on one tend to run well on the other. Sometimes this is because of the dominance of certain teams like Roush-Fenway Racing and Hendrick Motorsports. On other occasions, it is because a certain driver has an affinity for the course like Paul Menard.

Both two-mile tracks are minimally-banked.