Richmond is a track that caters to a wide variety of skills. Its three-quarter-mile distance and sweeping front stretch makes it behave both as a short track and an unrestricted, intermediate speedway. The result of that is drivers who perform well on both disciplines tend to excel at Richmond. 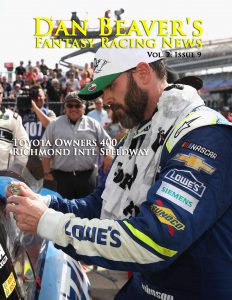 Fantasy owners can look to the two-mile tracks and the short courses.

A few weeks back, Kyle Larson’s completed his dominant start to the season with a victory at Auto Club Speedway. It virtually locked him into the playoffs and established him as one of the early frontrunners as a place-and-hold favorite on most tracks.

Brad Keselowski and Jimmie Johnson won the first two short track races of the season and that also put them on the radar screen for fantasy players looking to that track type as the primary source for handicapping.

But there is also some significant overlap between the two types and that is where some of the best drivers will come from this week. Joey Logano swept the top five at Auto Club Speedway, Martinsville Speedway, and Bristol Motor Speedway. Clint Bowyer has a worst finish of seventh on those three courses, while Chase Elliott has top-10s in all. If not for mechanical problems last week, Keselowski would certainly have added his name to the mix.