It is almost as if NASCAR can’t quite figure out what to do with Texas Motor Speedway. And that’s all right. The state of Texas has always been iconoclastic, so the race might as well be also. 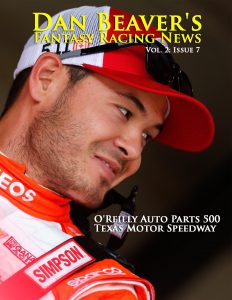 Depending on where one lives in its confines, Texas either considers itself a Western state or part of the South. Dallas is has a more Southern feel, while Fort Worth with its heritage as a cattle hub is more Western.

The O’Reilly Auto Parts 500 could easily be part of the Western Swing, but it’s not. Instead, it currently interrupts what would be a three-race, short track schedule. So, the Texas race stands alone just as many inhabitants the want state itself to.

Each track is different than the other, but perhaps the best way to think of them is as siblings. Sharing many of the same life experiences, they develop their own personalities, but there is always a certain commonality.

Putting aside the impact that has on fans, the proliferation of this type of track is not a bad thing for fantasy players. One can look back at the most recent “cookie-cutter” race and use that as a baseline to set this week’s roster. In the first two races on similarly-configured, 1.5-mile tracks this year, three drivers swept the top five, four more finished between sixth and 10th, and another three swept the top 15.