For many fans, Bristol Motor Speedway is the king of the short tracks. 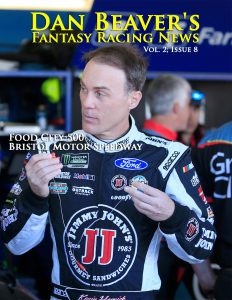 This bullring has one of the longest and most interesting histories in the sport, morphing through several iterations. No matter what track officials do to it, the competition has almost always remained intense.

There was a brief period of time when this track developed a single groove, but that seems to be in the past. And with NASCAR’s insistence on parity, it is almost impossible for one driver to run away from the field. Factor in the mandatory cautions at the end of segments one and two, plus some inevitable slow-downs along the way, and there is the potential for more cars than normal on the lead lap at the end of the Food City 500.

There are going to be plenty of dark horse options this week.

Last summer, the second- through fifth-place drivers, plus the seventh- and ninth-place drivers, had all finished outside the top 15 in the spring, which is a distribution of wealth rarely seen in NASCAR.

In the spring, dark horse top-10s were earned by Matt DiBenedetto and Trevor Bayne. In the summer, Stenhouse earned a runner-up finish. Chris Buescher was fifth. If there was ever a justification for rolling the dice and taking some fantasy risks, this is the week to do so.